KISSINGER – A LAWLESS DOUBLE AGENT: Why is a man of 93 years still kicking around, managing all the White House presidents since his arrival?

ndDecent people are sick and tired of this corruption and we demand that law enforcement and the courts act immediately in reigning in this terrorism. There is no person in our country that should be allowed to operate above and beyond the laws of our land. We want to see George Bush Senior called out for his life-long crime spree. We want to know his involvement with the assassination of our beloved JFK, and untimely death of John Junior, up to his involvement of 911.
We want to see the domestic terrorists of 911 be arrested and tried for their heinous crimes. And we don’t give a rat’s-ass who these people are. Their illustrious names and backgrounds mean nothing to us because they have killed our fellow citizens with their wars and false flags, shackled our liberties with their domestic laws and spying, stolen our wealth through their corrupt banking system, and dismantled the foundation of morality and decency upon which all great civilizations must be reliant uponAnd most important why aren’t we laser focused on taking down public enemy #1 Henry Kissinger and his ruling mob at the Council on Foreign Relations? From the time he arrived on the political scene with his heavy German accent and his dark background, no one in the media ever questioned his real back story and agenda. Why is a man of 93 years still kicking around, managing all the White House presidents since his arrival? Who is the head of America’s crime family—this Henry Kissinger?
opposition and have deliberately kept the truth from Americans with their entertainment style news that turns a blind eye to the Corleone-type gangsters running our country. Shame on each and every reporter who reads this article and goes back to committing the same ruse on their fellow Americans. Is your paycheck worth the karma that will be yours in the face of turning a blind eye to truth?
Why in the hell hasn’t Hillary Clinton been arrested? Her litany of crimes is beyond imaginable. Her entire entourage is a criminal cabal from John Podesta to Huma Abedin to their IT thugs at Crowdstrike to her shields at the FBI.  - KISSINGER – THE ORIGINAL AMERICAN GODFATHER
From the moment that the Central Intelligence Agency was created, lawlessness has ruled the White House by providing total power that has totally corrupted every president since Richard Nixon, who was guided by his head henchman, Henry Kissinger, the archetype of CIA White House, which became the seat of the criminal cabal in America.
Nothing was beyond Nixon and Kissinger because they knew that executive privilege would protect their criminal activity, bringing them unfathomable personal power and wealth. Even before Nixon, George H. W. Bush worked with the CIA to help assassinate John F. Kennedy, demonstrating that the CIA was in control of the White House. It has been downhill since.

America has become a lawless nation. It starts at the Council on Foreign Relations and then spills over into the CIA-controlled White House. From there the sewage flows over to Congress, then the judiciary and law enforcement, right down to schools, religious organizations, and people who we thought were in positions of public trust. Lawlessness is the norm among our elected officials, at all levels of government, as they do the bidding of their controllers who seem to have them blackmailed and co-opted in a web of illegal activities, from shady financial deals to pedophilia and human trafficking.


Institutionalized corruption, a lack of transparency, corporate control of government, and creeping neglect of existing laws is found everywhere. There is a growing pattern of wickedness and lawlessness dominating our society today that throughout history was a key marker of civilizations in the process of decline.

As we are learning through the truth news media today, the CIA, the Clinton Foundation/Clinton Global Initiative, several U.S. Senators, U.S. and NATO military generals, and the “power elite” are involved in activities that include: extortion, blackmail, money laundering,  human trafficking, pedophilia and child sex trafficking, slave labor, kidnapping, illegal organ harvesting, medical experiments on poverty-stricken populations, “regime change” for oil, pipelines and minerals, illicit government pay-for-play contracts, bribery, perjury, and obstruction of justice to name a few.
Key Question: The above list is comprised of illegal activities. So why, if we live in a land where there are well defined and established laws, are the perpetrators of these crimes not being investigated and indicted? Have we decided as a country that there are certain people who are above the law—too big to prosecute?


For example, it has been revealed that Secretary of State Hillary Clinton facilitated and profited from the trafficking of Libyan stinger missiles and sarin gas to the Muslim Brotherhood (ISIS), weapons which were obtained during the coup they perpetrated on Muammar Gaddafi, at which time they stole Gaddafi’s weapons, oil, gold, and his personal billions. Libyan arms trafficking led to the death of Ambassador Christopher Stevens. The Hillary Clinton State Department and the Obama White House ignored pleas for security and later, for rescue. 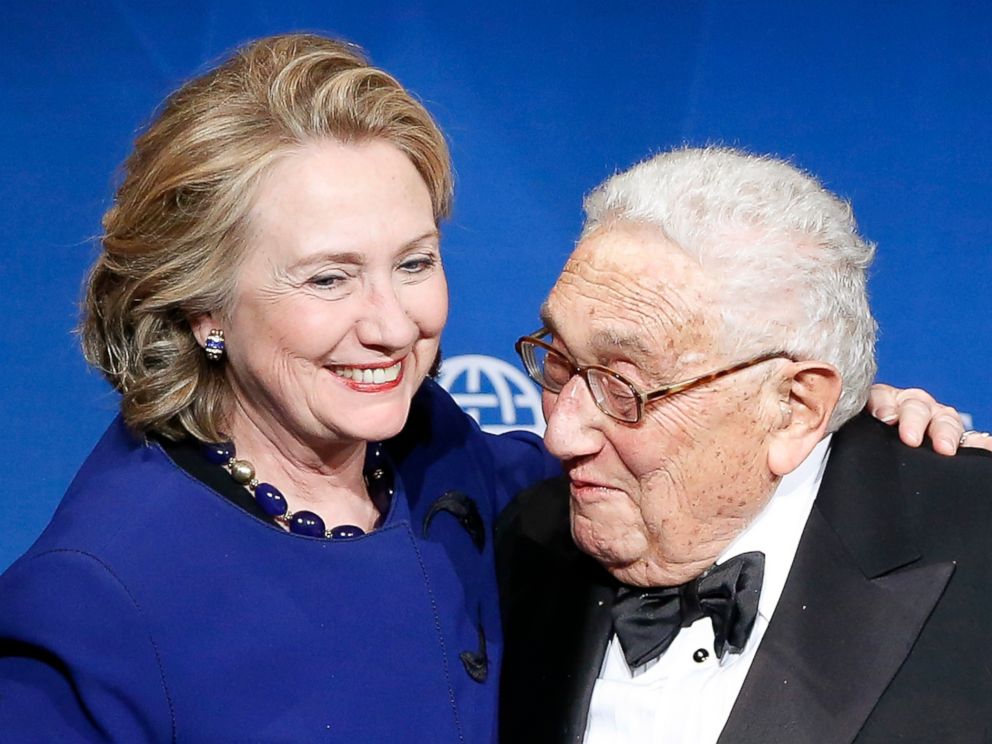 Question: Is Hillary Clinton and those in the State Department who were complicit in Ambassador Steven’s death above the rule of law?
Hillary’s emails are being withheld by FBI Director James Comey who is no boy scout in lawless America. Irrefutable proof is everywhere one can google that Comey was with the Clintons and their foundation. His shady background at Lockheed and HSBC only adds to the narrative that he is in place to protect and defend political criminals, not  those of We the People. Another key figure that has been protecting the Clinton emails from being released is FBI National Security deputy Andrew McCabe, who is believed to have taken a million-dollar bribe via a “campaign contribution” from a Clinton ally to his wife-physician Jill McCabe’s state senate race.

“I DON’T SEE WHY WE NEED TO STAND BY AND WATCH A COUNTRY GO COMMUNIST DUE TO THE IRRESPONSIBILITY OF ITS PEOPLE. THE ISSUES ARE MUCH TOO IMPORTANT FOR THE CHILEAN VOTERS TO BE LEFT TO DECIDE FOR THEMSELVES.”
— HENRY KISSINGER
Again, we ask the question that the main stream media has NEVER asked and answered. Who is Henry Kissinger that he could be a top advisor to Richard Nixon, Gerald Ford, Ronald Reagan, George H. W. Bush, Bill Clinton, George W. Bush, Barrack Obama, and former Secretary of State Hillary Clinton? What kind of position does he hold that he was an advisor to all these presidents, plus countless lesser politicians—year after year—both Democrat and Republican?
Why didn’t the media ask why Hillary Clinton courted the endorsement of Henry Kissinger during her presidential bid (claim) for president? Those of us in the alternative media know that the Kissinger and Clinton friendship goes back to when Bill sought out Kissinger’s support to pass NAFTA. Why had Hillary continued her apprenticeship with Herr Kissinger, soliciting his advice and calling him “friend.”


Would it surprise you to know that Kissinger was a sergeant in the 970th Counter Intelligence Corps during WWII, just as the OSS and CIA were getting started? He worked as a double agent in Germany and turned on his own nation and people. Kissinger practices Realpolitik, which implies politics that are coercive, amoral, or Machiavellian. George Soros and Kissinger have many of these same things in common. They were trained early on to be ruthless criminals pursuing their personal gains. But you won’t find this out from the corrupt media that does has been doing the bidding of the criminal cabal for decades.


As Richard Nixon’s aide-de-camp, Kissinger helped plan and execute a murderous, illegal foreign policy in Southeast Asia, Southern Africa, the Middle East, and Latin America and throughout the world. Millions died because of his actions. Kissinger and Nixon threatened to use nuclear weapons, and, indeed, Kissinger helped inscribe the threat of “limited nuclear war” into doctrine. Kissinger, in the 1970s, not only dug the hole that the greater Middle East finds itself in, but, as an influential advisor for both the first Gulf War in 1991 and its 2003 sequel made sure to keep America in a “clash of civilizations” that would keep America as the dominate world power.

PATRIOTS, JOIN US IN DRAWING THE LINE

We are either a nation of laws or the O.K. Corral. Together, we need to demand that laws in this country are applied to everyone equally and we need to start immediately. Realizing that this will be an enormous task of our generation—to clean the swamp that has been stinking for decades—let’s be reasonable and start rounding up the thugs at the lower levels where they will not receive as much protection as those at higher levels.

We need to round-up the pedophile and human trafficking perps at the fringes and work towards the next level, then the next. By doing this, we will cut off the elite’s supply of children and humans used for blackmail and life-extension purposes. We will cut them off in their supply chain so that their corruption cannot continue. Get it? Start at the flanks and work inward.

The old and sick will die. Kissinger, Soros, the Clintons, Rockefeller and Rothschilds, Bushes are aging, sick, and may even die before we can put them on trial for their crimes. But, rest assured, their Maker, whose power is much greater than any court of law, awaits them for their judgement day.
In the meantime, we can start cleaning up our own backyards, starting with family and community, repairing the moral fabric of our country that has been ripped apart by these Sodom and Gomorrah demons. Then let’s join together in support of the public trials that will occur with higher level criminals. At a national level, we can:
http://cosmiconvergence.com/2017/03/14/henry-kissinger-public-enemy-1/