Graviola: A Broad Spectrum Targeted Plant 10000 Times More Powerful Than Chemotherapy The Medical Mafia Covered Up In 1976: The Cancer Lies Cover Up Genie Is Out The Bottle

IDSW- Yet further uncovering of Medical Mafia Freemasonic Cartel Evil Cancer Multi Trillion Dollar cover up lies that's been going on and is now ending. These monsters are being exposed for the suffering and needless hurt of patients and their relatives through the decades.

KEY SALIENT POINTS:
- Graviola is yet another weapon in the arsenal against cancer and other disease IDSW blog will be covering, soon with a dedicated alternative medicine button section at the top.
- Graviola has broad spectrum of attack against a range of cancers.
- Shown to be 10,000 times more powerful than Adriamycin, yet it is a selective killer leaving healthy cells unharmed.
- An exciting thought is the synergy of several different anticancer strategies such as GcMAF , Laetrile treatment and others combined with Graviola.
- Even though some sources say only coffee should be used in enemas. It surely must make sense to attempt some Graviola juice/tea decoction enema and the patient themselves can determine whether improvements are happening.
- Coffee enemas combined with diet and pancreatic enzyme therapy should likely still be the main foundational thrust of treatment. Coffee Enemas provide effective pain relief, powerfully detoxify and support the liver, and assist in the breakdown and elimination of dead tumour tissue, thereby relieving the weakened patient of the energetic toxic burden .
- MORPHINE FOR PAIN RELIEF IS CONTRAINDICATED! Morphine is an immunosuppressant. There is relationship between the rapid deterioration of the patient and death and administration of morphine in analgesia. Coffee enemas are the powerful safe strategy but the medical mafia removed coffee enemas from the Merck Manual in 1971 - IDSW 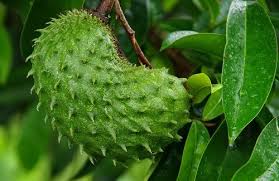 Research shows that with extracts from this miraculous tree it now may be possible to:

The source of this information is just as stunning: It comes from one of America ‘s largest drug manufacturers, th! e fruit of over 20 laboratory tests conducted since the 1970’s! What those tests revealed was nothing short of mind numbing… Extracts from the tree were shown to:
Effectively target and kill malignant cells in 12 types of cancer, including colon, breast, prostate, lung and pancreatic cancer.
The tree compounds proved to be up to 10,000 times stronger in slowing the growth of cancer cells than Adriamycin, a commonly used chemotherapeutic drug!
What’s more, unlike chemotherapy, the compound extracted from the Graviola tree selectively hunts down and kills only cancer cells.. It does not harm healthy cells

The Sour Sop or the fruit from the graviola tree is a miraculous natural cancer cell killer 10,000 times stronger than Chemo. …
Why are we not aware of this? Its because some big corporation want to make back their money spent on years of research by trying to make a synthetic version of it for sale.
So, since you know it now you can help a friend in need by letting him know or just drink some sour sop juice yourself as prevention from time to time. The taste is not bad after all. It’s completely natural and definitely has no side effects. If you have the space, plant one in your garden.


The other parts of the tree are also useful.

The next time you have a fruit juice, ask for a sour sop.
How many people died in vain while this billion-dollar drug maker concealed the secret of the miraculous Graviola tree?

This tree is low and is called graviola ! in Brazil, guanabana in Spanish and has the uninspiring name “soursop” in English. The fruit is very large and the subacid sweet white pulp is eaten out of hand or, more commonly, used to make fruit drinks, sherbets and such.
The principal interest in this plant is because of its strong anti-cancer effects. Although it is effective for a number of medical conditions, it is its anti tumor effect that is of most interest. This plant is a proven cancer remedy for cancers of all types. Besides being a cancer remedy, graviola is a broad spectrum antimicrobial agent for both bacterial and fungal infections, is effective against internal parasites and worms, lowers high blood pressure and is used for depression, stress and nervous disorders.

If there ever was a single example that makes it dramatically clear why the existence of Health Sciences Institute is so vital to Americans like you, it’s the incredible story behind the Graviola tree..
The truth is stunningly simple: Deep within the Amazon Rainforest grows a tree that could literally revolutionize what you, your doctor, and the rest of the world thinks about cancer treatment and chances of survival. The future has never looked more promising. Corrupt Evil National Cancer Institute Multi Trillion $ Cover Up Since 1976 Just Like Happened With Laetrile/Vitamin B17: What Kind Of Monsters Are These People?

The amazing anti-cancer properties of the Graviola tree have been extensively researched–so why haven’t you heard anything about it? If Graviola extract is One of America‘s biggest billion-dollar drug makers began a search for a cancer cure and their research centered on Graviola, a legendary healing tree from the Amazon Rainforest.

Various parts of the Graviola tree–including the bark, leaves, roots, fruit and fruit-seeds–have been used for centuries by medicine men and native Indians in South America to treat heart disease, asthma, liver problems and arthritis. Going on very little documented scientific evidence, the company poured money and resources into testing the tree’s anti-cancerous properties–and were shocked by the results. Graviola proved itself to be a cancer-killing dynamo.

But that’s where the Graviola story nearly ended.
The company had one huge problem with the Graviola tree–it’s completely natural, and so, under federal law, not patentable. There’s no way to make serious profits from it.

It turns out the drug company invested nearly seven years trying to synthesize two of the Graviola tree’s most powerful anti-cancer ingredients. If they could isolate and produce man-made clones of what makes the Graviola so potent, they’d be able to patent it and make their money back. Alas, they hit a brick wall. The original simply could not be replicated. There was no way the company could protect its profits–or even make back the millions it poured into research.

As the dream of huge profits evaporated, their testing on Graviola came to a screeching halt. Even worse, the company shelved the entire project and chose not to publish the findings of its research!
Luckily, however, there was one scientist from the Graviola research team whose conscience wouldn’t let him see such atrocity committed. Risking his career, he contacted a company that’s dedicated to harvesting medical plants from the Amazon Rainforest and blew the whistle. 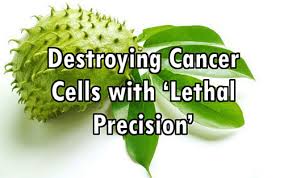 When researchers at the Health Sciences Institute were alerted to the news of Graviola,! they began tracking the research done on the cancer-killing tree. Evidence of the astounding effectiveness of Graviola–and its shocking cover-up–came in fast and furious.

The National Cancer Institute performed the first scientific research in 1976. The results showed that Graviola’s “leaves and stems were found effective in attacking and destroying malignant cells.” Inexplicably, the results were published in an internal report and never released to the public..

Since 1976, Graviola has proven to be an immensely potent cancer killer in 20 independent laboratory tests, yet no double-blind clinical trials–the typical benchmark mainstream doctors and journals use to judge a treatment’s value–were ever initiated….

A study published in the Journal of Natural Products, following a recent study conducted at Catholic University of South Korea stated that one chemical in Graviola was found to selectively kill colon cancer cells at “10,000 times the potency of (the commonly used chemotherapy drug) Adriamycin”

The most significant part of the Catholic University of South Korea report is that Graviola was shown to selectively target the cancer cells, leaving healthy cells untouched. Unlike chemotherapy, which indiscriminately targets all actively reproducing cells (such as stomach and hair cells), causing the often devastating side effects of nausea and hair loss in cancer patients. 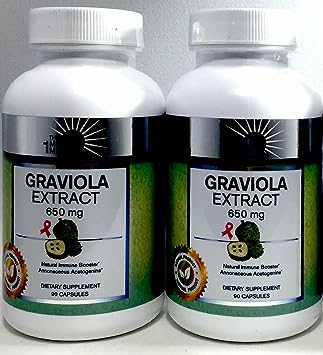 http://www.gaiahealthblog.com/2013/02/03/another-cancer-killer-guyabano-a-k-a-soursop/
I’m not one prone to get wrapped up into “urban legends”, “old wives tales”, “nutritional scams”, and all the rest, too much meticulous “research-ability” (if that’s a word) in my nature, and I know in my heart and instincts that the Guyabano plant is truly a miracle healer.
It kills me when I continue to read volumes upon volumes, including extensive overseas medical research and studies, that have proven there are countless natural solutions to cancer, many of which have been used for millinea.
Wanted to post this article about the Guyabano, a.k.a.. Soursop fruit, the “Cancer Killer”.