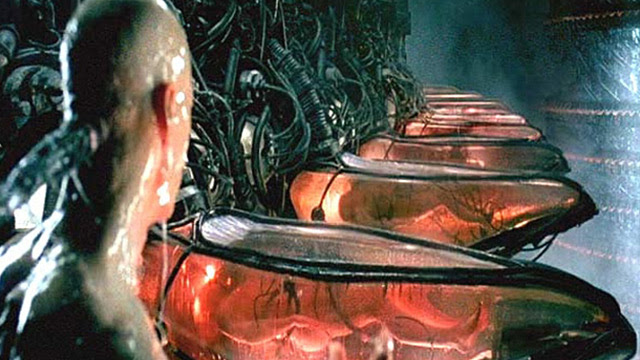 There is a War on Consciousness, War on the human soul, War on Free Thinking. It is becoming more and more apparent that the more one reads and connects dots and appreciates the breadth, and depth, and not even 3 dimensional nature of this situation that is ensuing but multidimensional situation. We must conclude
KEY SALIENT POINTS:
- We have been lied to about virtually everything including the very nature of the space/air in front of our faces. And reality
- Weve had bad lying horrible evil people at the helm leading us as blindfolded sheep
- These times are now coming to an end and this is why the elites are stepping up their false flag state sponsored terror plus various other complex methods of lockdown
- Appreciating all this makes us conclude just how vast deep complex this Conspiracy must be. Just like Neo wakes up out of his liquid pod and pulls the plug about the back of his neck and looks around him.
- They've lied to us about sleep and dreams, how its actually out of body experience and interdimensional travel
- They've lied about everything
- They are Scum but their time is over and they know it
- Self buildable simple 5 to 10KW devices are the way out of this for us. Not secret space programme disclosure like I used to think though that will help -IDSW

-----------------------------------------------------------
INCREDIBLE WISE WORDS FROM WAKING TIMES - IDSW
Society is directed by a never-ending mainstream narrative which is always evolving, and always reaching new dramatic peaks in sensationalism and hype. They fill your mind with topics they select, they keep your attention on these topics, and they invite and encourage you to argue amongst each other about these topics. In this way our collective attention is permanently commandeered, preventing us from diving too deeply into matters which have more than a superficial impact on day-today life.
Free-thinking is the ability and willingness to explore of ideas and areas of the mind which are yet undiscovered or are off-limits. It is a vanishing art that is deliberately being stamped out by a control system which demands conformity, acquiescence and obedience of body, mind, and spirit.
For your consideration, here are three questions you’re not supposed to ask about life in our profoundly sick society.

1. Who owns the money supply, and the world’s debt?

Pretty much the entire world is in financial debt, an insidious form of slavery which enables the exploitation of human beings and of all things in nature. It’s maddening when you think about it. The United States alone supposedly owes some $20 trillion, while the world at large owes a shocking $215 trillion?
But to whom, precisely?
Money is just a medium of exchange which facilitates transactions between people. In and of itself it has no intrinsic value as we could just as easily use sea shells instead of dollar bills and still be able to get things done. But today’s money is the property of private third-parties who rent it out to national governments, who then use the labor of their citizens as collateral against these loans. This is a highly refined form of slavery, which has already put future unborn generations of human beings in debt.
But who, exactly does the human race owe? Who are our debt-slave masters?

Ownership means having the explicit right to use, control and dispose of something in the manner of your choosing. The one thing you are born with that you take with you to your death is your own body, but do you own it? If not you, then who does own your body?
If this question were already settled in our society then there wouldn’t be ever-increasing pressure on those who choose to refuse vaccines. Children battling cancer and other serious illnesses wouldn’t be forced to take chemo and radiation under penalty of law and under threat of being taken from their parents. Water wouldn’t be fluoridated without our consent. Natural medicines wouldn’t be outlawed under threat of fines and prison time.
We are rapidly approaching a time when people will be required by law to take psychotropic medications as citizens were in Aldous Huxley’s dystopian classic, Brave New World.
Do you own your body, or does it belong to the state?


3.  Why is the exploration of consciousness restricted and illegal?

The most effective prisons are not material, but are constructed inside the mind. Perception, opinion and understanding are all dynamic concepts, not at all static. These can all change in the blink of an eye just because a new idea or experience resonates with you in a special way. Our evolution depends on our ability to expand the frontiers of what’s possible, and when the mind is held in confinement by an entrenched system and powerful cultural paradigm, progress, even happiness, is stunted.
In this societal trap you are given free rein to debase your consciousness and your spirit with alcohol, dangerous drugs, pharmaceuticals, television, pornography, theatrical violence, and then some, yet many natural medicines which elevate consciousness and provide a window into the soul are illegal.


“This is the way freedom is hijacked—not all at once, out in the open, but stealthily, little by little, behind closed doors, and with our own agreement. How will we be able to resist when so many of us have already willingly handed over the keys to our own consciousness to the state and accepted without protest that it is OK to be told what we may and may not do, what we may and may not explore, even what we may and may not experience, with this most precious, sapient, unique, and individual part of ourselves?
If we are willing to accept that then we can be persuaded to accept anything.” ~Graham Hancock

“It is no measure of health to be well adjusted to a profoundly sick society.” ~J. Krishnamurti