Fukushima 2011: Not a Natural Accident Just Like Chernobyl 1986. Both done by the same Rothschild Zionist Sick Thugs 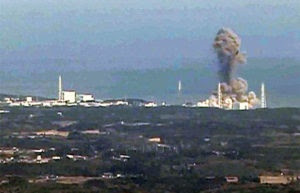 In a concerning report, IDSW blog research team chooses to hold off judgment until all the facts are in. Unless the Keshe Foundation is a hoax apart from the successes of the Magrav  plasma pens and pain pads. Reports are that Keshe GANS Magrav technology is making Fukushima safe. Let's hang fire until we know more. - IDSW

The Israeli computer virus ‘Stuxnet’ caused the failure of the back up cooling system at Fukushima. The artificial earthquake was created to false flag the Fukushima ‘accident’. Stuxnet was created by an Israeli team headed by Chief of Staff Gen Gabby Ashkenazi. The Israeli security company Magna was responsible for security at Fukushima. The Reactor 3 explosion was a nuclear device, not hydrogen gas. The mushroom cloud was brown like a nuclear explosion.
There is plenty of evidence that the earthquake was caused by HAARP. Gakona was switched on for 3 days during which time NASA detected ionospheric heating over Japan. HAARP is an ionospheric heater. This is a world government/Rothschild crime and complies with Kissinger’s plan to control the world food supply. By contaminating the Pacific fish supply. the Zionists have killed a huge non-corporate source of food as per Kissinger’s recommendations. Fukushima was a cunning and lethal act of world war.

Seriously – HOW MANY BLOODY TIMES DO I HAVE TO POST THIS?

VIA https://www.ixquick.com/ DON’T USE GOOGLE!